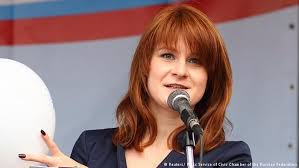 The 30-year-old gun enthusiast operated as a Kremlin agent as she befriended National Rifle Association leaders and influential conservatives, she admitted Thursday in federal court in Washington.

True friends stab you in the front.
Oscar Wilde