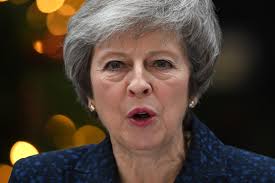 Theresa May, who has been prime minister since shortly after the UK voted to leave the European Union in 2016, has faced criticism in her party for the Brexit plan she has negotiated

Prime Minister Theresa May remained defiant soon after it emerged on Wednesday morning that she will face a challenge to her leadership when the required number of Conservative MPs – 48 – sent in letters expressing lack of confidence in her, throwing the Brexit process into another phase of turmoil.