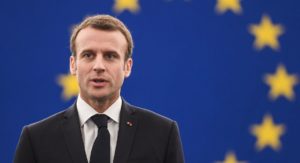 Macron’s government had previously suggested that any increase in the minimum wage would destroy jobs rather than help create them.Embattled French President Emmanuel Macron on Monday announced a series of financial measures seeking to defuse the “yellow vest” revolt that has triggered violent protests in cities across the country.

Protestors wearing “yellow vests” (gilets jaunes) demonstrate on their knees against rising costs of living in Lille, northern France, on December 8, 2018. The “yellow vest” movement in France originally started as a protest about planned fuel hikes but has morphed into a mass protest against President’s policies and top-down style of governing.