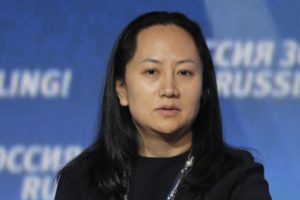 Meng, the daughter of Huawei’s founder, was detained on the same day that President Donald Trump and his Chinese counterpart, Xi Jinping, agreed over dinner to a 90-day cease-fire in the trade dispute.

China summoned the U.S. ambassador to Beijing on Sunday to protest Canada’s detention of a senior executive of Chinese electronics giant Huawei at Washington’s behest and demand the U.S. cancel an order for her arrest.